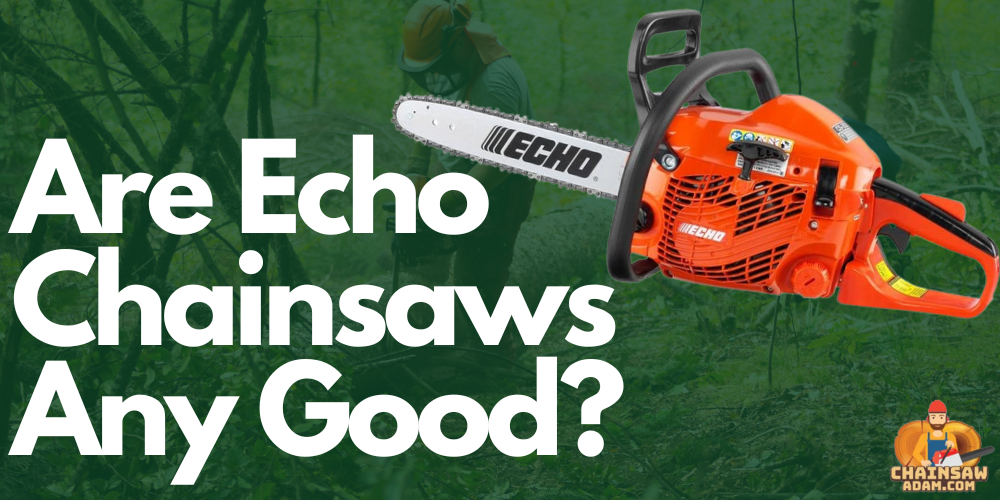 Are Echo chainsaws any good?

I’ll be answering questions such as what customers have to say about Echo, what types of chainsaws they produce, is the quality any good, and more stuff!

Table of Contents show
What do customers say about Echo?
What types of chainsaws does Echo produce?
Is Echo’s chainsaw quality any good?
Is Echo as good as Stihl?
What’s the best Echo chainsaw?
Conclusion

What do customers say about Echo?

The majority of Echo chainsaw reviews are positive. Customers have been mentioning how they’ve replaced their old chainsaw with a new Echo one and how well it’s performed.

Customers have mentioned its powerful engine and being able to cut down thick trees without an issue. Even though they’re able to cut through thick wood, they’re also lightweight which isn’t a typical combination.

Even voluntary USDA Forest Services use Echo chainsaws. They use it for maintaining hiking trails, slicing through pines, oaks, hickory, ironwood, and other trees with ease.

Echo chainsaws are lightweight but they’re still able to cut through hardwood. Users have mentioned that as long as you maintain the saw by cleaning it, using fresh gas, and oiling it, it will work like a dream.

But like any product, Echo also has its flaws. There have been some users mentioning how the chainsaw just stopped working.

A user mentioned how they replaced the bar and chain to try and get it running again but it wouldn’t work.

Unfortunately, they just threw it into the trash. You do get dud products like this no matter which company you go with so I wouldn’t worry about it since this is a rare issue.

What types of chainsaws does Echo produce?

The majority of their saws have 18 inch and over bar sizes. But there are still a handful of 12 – 14 inch bars if you want to prune.

Even though their main technological advances are with gas saws, their electric chainsaws have received a massive amount of positive feedback. I’m talking about the Echo 16 inch battery chainsaw.

Even though it’s battery powered, it’s able to cut through 14 inch thick, rough trees. Which is not something a lot of electric powered saws can do.

If you’re using a chainsaw around your property, an Echo chainsaw is a great choice. Since that’s exactly what Echo designs their chainsaws for.

So if you’ve got a bunch of trees to cut or a tree has fallen and you need to get rid of it, consider giving Echo a go.

Is Echo’s chainsaw quality any good?

Echo chainsaws are of high quality. Their bars and chains are made from quality metal that won’t snap or go dull quickly. The handle is typically made from rubber to help reduce the amount of vibration you feel.

Sometimes it’s encased in plastic but not a cheap feeling plastic that creaks. Thanks to this Echo chainsaws are able to be lightweight and keep producing a lot of power.

Echo chainsaws are great for pruning, felling and splitting logs. Whatever you need a chainsaw for, Echo has you covered.

Is Echo as good as Stihl?

Yes, Echo is as good as Sithl and better in some cases since Stihl chainsaws tend to cost a bit more whilst providing the same amount of performance. Both Echo and Sithl produce gas and electric saws whilst proving a range of bar sizes.

Either one is a solid option but Echo chainsaws are more available in retail stores.

The best Echo chainsaw is the Echo 91VG52CQ. It has a 14 inch bar, a 30.5cc gas powered engine, and is lightweight making it easy to manouver. It has an automatic bar oiler which reduces the heat being produced and an anti vibration handle.

Even though it’s got a small bar it has a mighty engine. It’s able to cut through trees 12 inches thick. It will fell small trees, limb, split firewood and even prune.

This chainsaw is the sweetspot for home owners and covers the majority of tasks you need doing.

Even though it’s a gas powered saw, you still don’t have to do a lot of maintenance thanks to the automatic oiler. You simply have to top it up with bar oil when it’s getting low.

This is something that will last you for many years to come thanks to its high end Japanese manufacturer where this was constructed.

Are Echo chainsaws any good? Yes, Echo chainsaws are good. They’re great for pruning, splitting wood, limbing branches and cutting down trees. You’ll find a variety of sizes including 12 inch bars all the way to 24 inches bars so there’s plenty of variety.