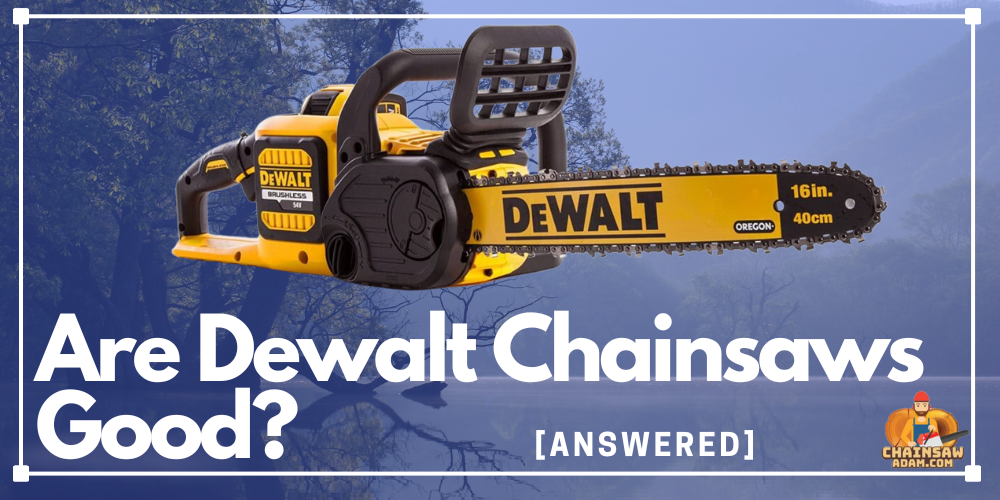 Are Dewalt chainsaws good? Are they worth it?

You’ve come to the right place because that’s exactly what I’ll be going over in this post.

I’ll be going over what customers say about Dewalt, the types of chainsaws they produce, and their quality.

Let’s get straight into it!

Table of Contents show
What do customers say about Dewalt?
What types of chainsaws does Dewalt produce?
Is Dewalt chainsaw quality any good?
Which Dewalt chainsaw is best??
Conclusion

What do customers say about Dewalt?

It’s something that’s great for smaller jobs like limbing, cutting firewood, and felling small trees. They’re lightweight and easy to manouver thanks to the build equally distributing the weight.

Users have mentioned that it’s not a super powerful chainsaw but it was never designed to be that. This is not for professional chainsaw users unless they’re using this for limbing and climbing up tall trees.

If you have small jobs to do, it’s incredibly annoying having to bust out the big gas/petrol chainsaw. Since they’re loud and heavy it can get kind of annoying to use them for small jobs.

Instead, a small Dewalt chainsaw is great for the light duty tasks and is easy to start. So you won’t be spending any time pulling on a cord.

Since Dewalt chainsaws are very lightweight, customers have mentioned that their wife will use it. And it’s even great for the elderly, they won’t be hurting their back lifting it or trying to pull the pull cord to get it started.

Overall, users are in love with Dewalt chainsaws.

What types of chainsaws does Dewalt produce?

Currently, Dewalt only makes battery chainsaws and not any corded or gas/pertrol chainsaws

Users have mentioned that they get an hour of cutting time with Dewalt’s excellent battery. That’s plenty of time for light duty work.

Typically, Dewalt chainsaw bars are 12 inches long but you can find some models that have a 16 inch bar. If your aim is heavy duty work, you’re going to want to skip Dewalt chainsaws and look somewhere else.

Their chainsaws aren’t for felling large hardwood trees like oak. Instead, their saws are for pruning, limbing, splitting firewood, and felling small trees.

You can comfortably cut through wood 10 inches thick with their 12 inch bars. They perform very well and according to reviews I’d say they have the highest rated chainsaws.

Since they’re powered by electricity, it’s quite when operating, making things easier on your ears and more peaceful for your neighbours.

Is Dewalt chainsaw quality any good?

The quality of their chainsaws is very high, they’re not going to break on you anytime soon. Dewalt chainsaws have been made to last for years to come.

Sure, a lot of the chainsaw is made from plastic but it doesn’t feel cheap. The chainsaw doesn’t make any of those creaking sounds and actually feels good to hold. The handle has a rubber grip so you won’t lose your grip.

The chain is sharp and does not dull quickly, you can also sharpen it very quickly with a manual sharpener. Overall, the chainsaw will feel great in your hands.

You can even handle their chainsaw with one hand but of course you should never do that. Their chainsaws are very light weight.

Which Dewalt chainsaw is best??

The best Dewalt chainsaw is the Dewalt Flexvolt. It has a 16 inch bar, allowing it to cut wood up to 14 inches thick. It’s battery powered making it portable, quiet, and easy to start. Also, it only weighs 12.2.lbs/5.5kg, making it easy to manouver and you won’t quickly fatigue.

There’s a tool free chain tensioning system. You simply have to turn a knob to adjust the chain’s tension.

You see, as time goes on the chain will loosen so it’s not going to cut effectively. That’s why you need to tighten it back up, but not too tight otherwise the chain could snap.

There’s an automatic chain lubrication system. You see, when you’re cutting the chainsaw is going to heat up and this is going to cause the chain to dull and even burn the bar.

Oil will help lubricate the chain and allow it to keep cutting optimally. You simply have to top this up with bar oil, there’s no need to manually oil it yourself.

Another great thing about this is the chain brake. You see, if you hit the tip of the bar on something, it will cause kickback, flinging the bar in the direction of the user.

That’s why there’s a chain brake to automatically stop the chain from spinning before it hits the user.

Hope you found the answer you were looking for in this post.