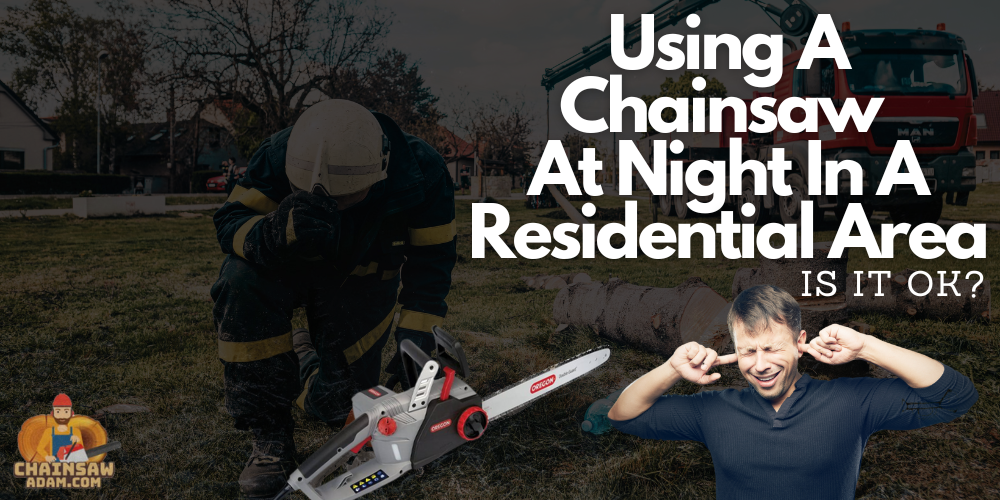 Is using a chainsaw at night OK?

You’ve come to the right place because that’s exactly what I’ll be going over in this post.

I’ll be talking about the dangers of using a chainsaw at night and the disturbance it may cause.

When’s the legal time to start using your chainsaw?

However, if you’re using your chainsaw at 6 am in the morning and neighbors are complaining, you may receive a warning from the local authorities. This is considered antisocial behavior and can lead to evictions and fines.

The best thing to do is talk with your neighbors about what time in the morning or night you can use your chainsaw so you won’t disturb them.

A lot of this can simply boil down to common sense. Avoid making a lot of noise early in the morning or late at night and you’ll be fine.

Is a pole saw worth it?
Chainsaw smoking
Chainsaw won’t cut even after sharpening

Is using a chainsaw at night dangerous?

You should not be using a chainsaw at night because you can easily injure yourself. Your visibility is poor and you’re unable to see everything around you.

Yes, if you go out with a head torch or even turn on your car light beams, the visibility is still not that good. You still won’t be able to see the environment the way you would when the sun is out.

Also, you may be disturbing wildlife and even attract unwanted attention. There’s really no need to use your chainsaw at night unless there’s a tree blocking the road.

What should I do if my neighbors are using their chainsaw at night to disturb me?

The best thing to do is to speak with your neighbors. Talk to them politely, let them know they’re disturbing you but with a serious tone.

If this doesn’t work, your best option is to call the authorities and write a letter to your local council.

I know what it’s like living next to nightmare neighbors who cause you a headache no matter how civil you are. In these situations, you’re best going to the local authorities after you asked them not to disturb you.

In the United States, there’s a noise pollution act of 1972 which regulates noise pollution with the intent of protecting from dangerous noise levels and minimizing noise annoyance. SOURCE

In residential areas, the permissible noise levels are 55 dB and 45 dB during daytime and night time. SOURCE

In the UK, there’s no exact noise level you must follow. However, if complaints are given to the local council about the noise level, they will further investigate to resolve the issue. SOURCE