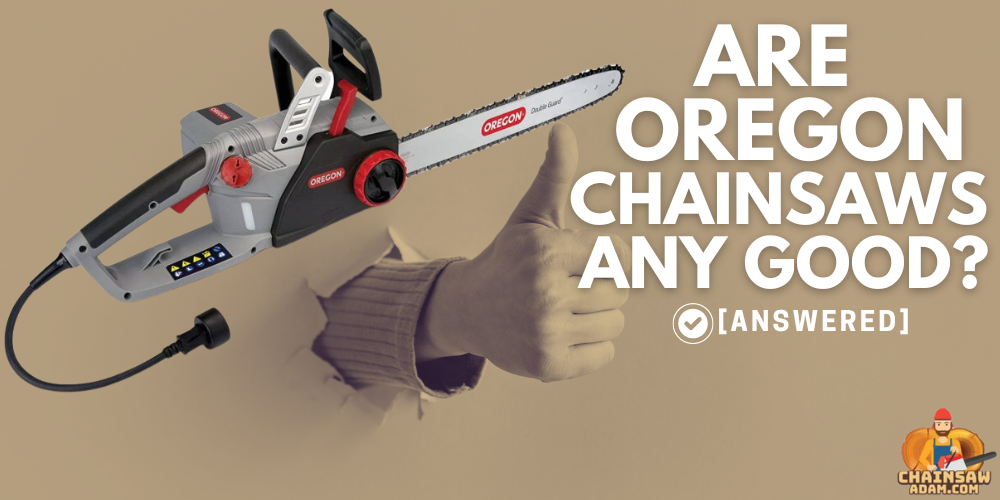 So you’ve been searching around for a chainsaw and stumbled upon Oregon. But who are they? Are Oregon chainsaws any good?

Well I’ll be answering that question in this post.

I won’t add any unnecessary fluff into this post and get straight into if Oregon chainsaws are worth it.

What do customers say about Oregon?

The overwhelming majority of Oregon chainsaw reviews are positive. If you look at different retailers, their chainsaws are at least 4 stars or higher.

When it comes to felling trees, you can fell small sized trees. These Oregon saws were not made for big trees. They’re simply not designed for that.

Customers have used their Oregon chainsaws for years, so you’re able to get your money’s worth out of them.

When it comes to battery time, it typically lasts for 25 minutes of running time. That’s plenty for one session.

Some of their chainsaws are self-sharpening. Yup, the chainsaw is able to sharpen by itself. And it’s no gimmick, it does a damn good job.

How is it able to sharpen by itself?

Well there’s a mechanism that you activate and it will sharpen the chain. You push down a little switch that connects a chainsaw sharpener to the chain.

Then you activate the chainsaw so the chain is rapidly rotating around the bar. And at this point, the sharpener has connected with the rotating blade. Sharpening that blade instantly.

How long does it take to sharpen?

Leave it to run for at least 5 seconds and your chainsaw will be noticeably sharper.

When it comes to affordability, some customers have said it’s a bit expensive but well worth it. However, others have called it a bargain.

I think it depends on your finances and how much you’re willing to spend. I personally think Oregon chainsaws are priced very well.

How to cut a big log with a small chainsaw
What Size Chainsaw do You Need
How long does a chainsaw bar last?

What types of chainsaws do they produce?

Right now, Oregon ONLY produces electric saws. Some are corded and some are battery powered.

So that might be a turn off for some, but hear me out

…Even though it’s electric, it’s able to plow straight through logs with ease. Even big logs if you cut them properly.

And it’s able to cut down small trees (10 inches thick) without an issue.

So if your needs are to cut through a lot of logs, Oregon have the go-to chainsaws.

But if you want to cut down big trees, they’re not for you. For big trees, check out this guide. I reveal the best saws for thick wood.

Since they’re electric, you can easily start them which is great if you’re a beginner. Just press a button and start working at it. Simple!

If you want an unlimited amount of stamina, go for their corded saws. If you want to take it on the go, get their battery powered saws.

Are Oregon chainsaw quality any good?

Did you know that Oregon aren’t known for their chainsaws?

If you look at their website, they provide so many bars and chains. I believe they’re the biggest commercial producer in the world when it comes to that.

And because they have a lot of experience making bars and chains. They’ve managed to make them incredibly strong at affordable prices.

So if you purchase something for Oregon, then know their products can survive a bomb blast.

Ok, so not a bomb blast but they’re incredibly durable and their chains are easy to sharpen.

So when you get a chainsaw from them, you can rest knowing it’s made with quality in mind. And it’s going to last for years.

Are Oregon chains as good as Stihl?

When it comes to durability, Oregon chains are a little less dense than Stihl. However, with Stihl, you’re paying more money so it balances it out. You’ll get more durability from a Stihl chain but more value for money with Oregon chains.

Which Oregon chainsaw is the best?

The Oregon cordless 16 inch self sharpening chainsaw is the best they have to offer. It’s able to cut through lots of thick logs with ease and go through a bunch without running out of battery. It also sharpens by itself making it easier to maintain. It has a 16 inch bar, an electric battery, and weighs 12lbs.

Are electric chainsaws any good?

Overall, they’re a trusted brand, and you won’t be disappointed.

I hope this guide was helpful.