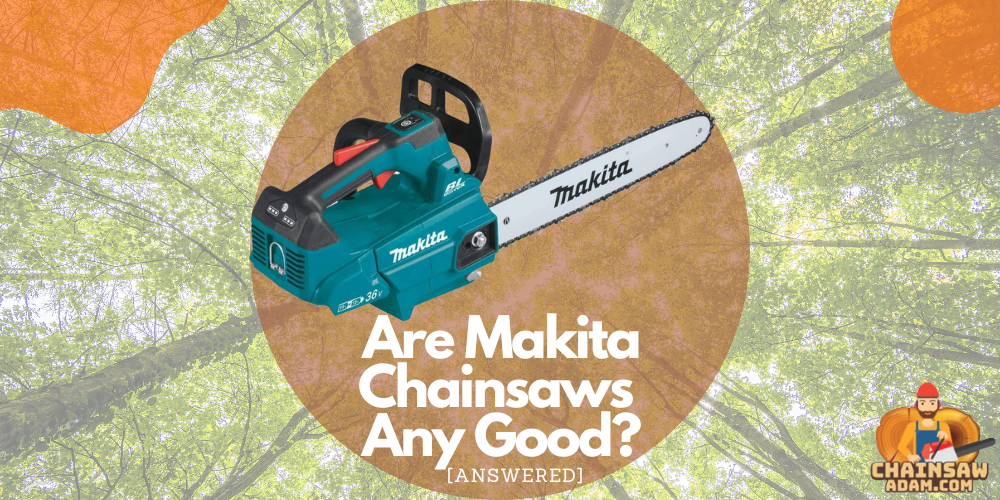 Are Makita chainsaws any good?

I’ll be going over what customers say about Makita, the quality of Makita chainsaws, where they’re made, and which of their chainsaws is the best for you.

Let’s get straight into it!

What do customers say about Makita?

The vast majority of Makita chainsaw reviews have been positive, customers are saying so many great things about them. Users are mentioning how easy it is to start. You simply press a button and you’re good to go. There’s no tugging at a cord for ages or trying to tune the saw every time you use it.

Users use it to limb, buck, cut down small to medium sized trees, and one user mentioned how he used their chainsaw to cut through hardwood.

If you plan on cutting up a load of logs, users have mentioned the chainsaws are great for that. You can do it with complete ease. You can use their chainsaws for a long period of time since the weight is well distributed around the chainsaw and lightweight.

Their saws are more for light duty applications users have mentioned. You won’t be cutting all day and felling large trees with their saws. However, that’s not what Makita chainsaws were made for. They were made for light duty to medium sized tasks but done really well and reliably.

But Makita also has some problems with their chainsaws. A few customers have mentioned that the chain wasn’t effective for cutting and would also ruin the bar. So they’d have to replace the chain and one user mentioned he had to replace the bar.

It’s worth keeping in mind that these are just a handful of customers. Overall, users have talked very positively about Makita saws.

What types of chainsaws does Makita produce?

Makita produces both gas and electric chainsaws. However, the majority of their saws are battery powered electric saws. That’s their wheelhouse and where Makita tends to shine and stand out from the crowd.

Their chainsaws are great for pruning, limbing, bucking, splitting firewood, and felling small trees. One lady mentioned that she purchased a Makita battery operated saw for her husband and said it would last about 1 hour and a half. Another user mentioned the saw lasted 30 minutes since he was cutting a lot of hardwood.

It depends on the tasks you’re doing that determines the life of the battery. Overall, they perform well and get the job done. The majority of their bars range from 10 inches to 16 inches long.

Is Makita chainsaw quality any good?

Customers have been mentioning the super quality of the battery, saying it’s one of the best out there. However, if you want a spare battery to keep on hand, Makita chainsaw batteries are pretty pricey. They can last over an hour or under if you’re cutting hardwood.

Some people had an issue with their chains but for the most part, their chains will last you a long time and they’re easy to sharpen. The bar and chain are made from quality metal, so it won’t snap on you.

You can comfortably cut through 14 inch thick wood with their chainsaws, making it great for the average homeowner. If you plan on cutting large trees, you’re going to want to skip Makita as their chainsaws aren’t designed for that.

Makita chainsaws are a great investment and something that’s going to last for years to come.

Are Makita chainsaws made by Dolmar?

Dolmar is one of the oldest chainsaw companies and it originates in Germany. Makita, a Japanese company acquired Dolmar in 1991. Dolmar chainsaws became fewer in numbers because they were now under the Makita brand. Both Makita and Dolmar chainsaws are made by the same manufacturers.

Which Makita chainsaw is best??

The best Makita chainsaw is the Makita XCU04PT1. It has a 16 inch bar and powered by a 5Ah brushless battery pack. It’s able to cut through 14 inch thick wood with ease as well as hardwood. It weighs 21.8 pounds/9.8 kilograms. It’s great for limbing, splitting firewood, bucking, and felling small trees.

Are Makita chainsaws any good? Yes, Makita chainsaws are good. You’re able to prune, limb, buck, split firewood, and fell trees thanks to their variety of bars. You can decide on battery, corded, or gas operated chainsaws. They’re easy to use and built to last for years.