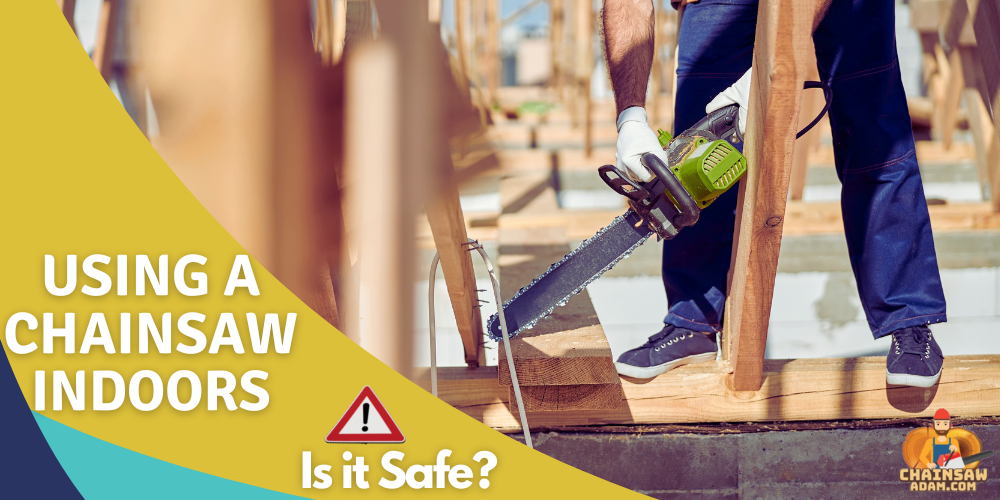 Is it OK to be using a chainsaw indoors?

I’ll be telling you everything you need to know about using a chainsaw indoors.

So let’s get straight into this!

The dangers of using a chainsaw indoors

When working with gasoline engines, they emit carbon monoxide. In fact, this farmer died from carbon monoxide poisoning while using his gasoline-powered pressure washer to clean his barn.

Many people using gas powered tools have been killed due to carbon monoxide poisoning. They were using it indoors without any optimal ventilation.

So if you’re going to be using your gas/petrol chainsaw indoors, make sure the room is ventilated. Have the windows and doors open, as well as any fans on.

If you’ve got small children, it’s probably best to avoid using the gas chainsaw since a small amount of carbon monoxide can be deadly to children. It’s a silent killer and toxic. Not to mention you’ll be making a lot of noise, disturbing your family and neighbours.

How long does it take to get carbon monoxide poisoning?

How long does it take for carbon monoxide to dissipate?

It can take several hours. As you breathe in the fresh air, your body will get rid of it. SOURCE

When is it OK to use a chainsaw indoors?

It’s best to never run a chainsaw indoors. There are hazards all around you such as walls, the ceiling, and items all around the room. If you hit something, it could cause kickback, damaging the room and even injuring you.

Look at this video, there are hazards all around him, he could easily trip, and I don’t believe he’s wearing chainsaw chaps.

Sure, he got away with it and probably saved himself some time and money, however, it’s best to be safe than sorry.

If you’re completely set on using a chainsaw indoors, at least make sure you’re using an electric chainsaw. This way you avoid any carbon monoxide poisoning and you won’t be disturbing the people around you.

If you live on your own, at least let someone know what you’re going to be doing that day. This way you’ve at least got someone who may check up on you.

Make sure you’re wearing all the necessary safety gear and there’s no one around you to hit. Just in case you hit the bar and you lose control.

It is recommended you don’t use a chainsaw indoors. A gas-powered chainsaw will output carbon monoxide which is incredibly poisonous and can kill if the room is not ventilated. The noise will disturb those around you and you could injure yourself.