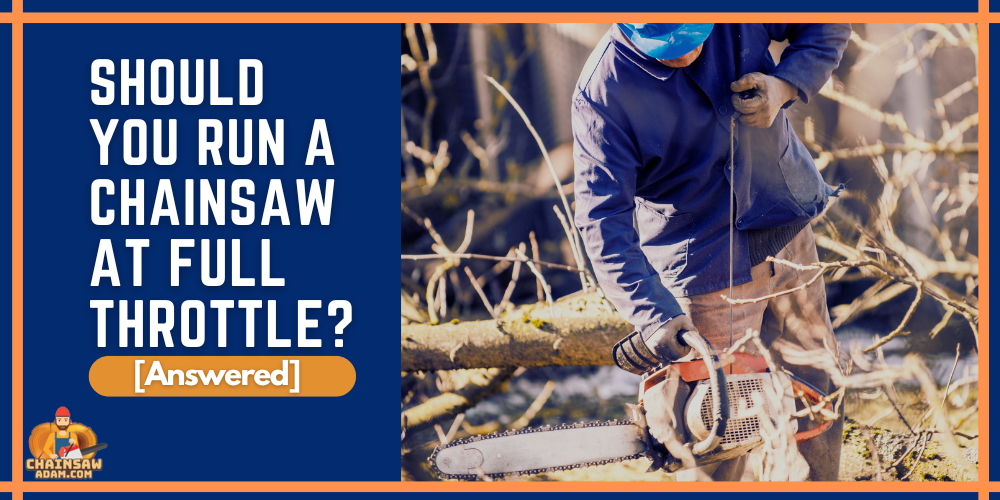 Should you run a chainsaw at full throttle?

Well in this post, I’ll be answering exactly that, so let’s get straight into it.

What is the chainsaw throttle and what’s it used for?

Now that you’ve bought a chainsaw, you may have some questions about the functions. Let’s start with learning about what the chainsaw throttle does and how it functions.

You should do this to prevent you from accidentally starting the saw. It functions much like a safety lock (or catch) on a gun. It’s one of many safety precautions in a chainsaw, the other being a chain brake.

If the chainsaw begins to make spitting sounds, you should tap the throttle some more after cranking it.

This allows the engine to get more fuel. After it’s started, the throttle is your control to regulate its RPM or revolutions per minute. It does this by decreasing or adding more fuel to the motor.

Will running the chainsaw at full throttle bog down my chainsaw?

To give you a direct answer, no, it won’t. A chainsaw is designed to function at full throttle. The reason it’s designed this way is to provide you with less fatigue and maximize productivity.

If your chainsaw does begin to bog down, it’s not because of running it at full throttle. There may be some parts in the chainsaw that are causing this.

To give you a brief overview of what may be occurring, you first need to look at what parts may be causing the problem. Is it a problem with the filters?

This is one of the easiest parts to check in the chainsaw. If you have used the saw for many hours, the air filter could probably be clogged. This prevents the carburetor from getting any air.

If that doesn’t solve your problem, the carburetor might need some adjustment. In general, there are two adjustment screws.

Once you’ve checked everything, but your chainsaw is still bogging down at full throttle, I’d suggest tuning up your chainsaw. Tuning up means checking on every part of the chainsaw and replacing anything that should need replacing.

Will running at full throttle jeopardize the safety?

Since I can’t escape the inevitable, I’ll now address one of the most critical questions when it comes to operating a chainsaw. Will running at full throttle jeopardize safety?

Chainsaws are intended to be used at full throttle. To give you a simple answer, no, it shouldn’t.

Safety should always be a concern when it comes to chainsaws. While it’s not running, a chainsaw can still provide you with some cuts or wounds due to how sharp it can be.

Chainsaws are usually light to carry. Being lightweight but operating with a lot of speed (at full throttle) could provide you with some terrible consequences.

Luckily, the manufacturers design these chainsaws with the user’s safety in mind. One potential danger of using a chainsaw at full throttle is kickback.

If kickback occurs when you’re operating at full throttle, don’t worry. Chainsaws contain a chain brake to prevent the blade from reaching you.

In any case, you should operate your chainsaw at full throttle in general. Depending on the thickness of what you’re cutting, you’re at greater risk of kickback when your saw operates at low speeds.

It’s best to follow every safety tip given to you to improve your experience when using a chainsaw goes smoothly.

Will my cuts be less accurate if I’m running at full throttle?

No, running at full throttle should give you the same accuracy as any other speed. When it comes to chainsaws, operating at a low speed increases your risk of potential dangers.

I’d say cutting wood at full throttle may even give you better cuts than running it at any other speed. As mentioned before, however, it depends on what you’re cutting.

Some materials are thicker than others, which means you’ll generally run into a material where it’s a must going full throttle.

Running the chainsaw at full throttle is generally how it should be used. Trying to operate it at any speed other than what’s intended will reduce your chainsaw’s life span.

Yes, you should run your chainsaw on full throttle since that’s what the manufacturers designed it for. You’ll still be cutting safely and accurately at full throttle but you will be using more gas.