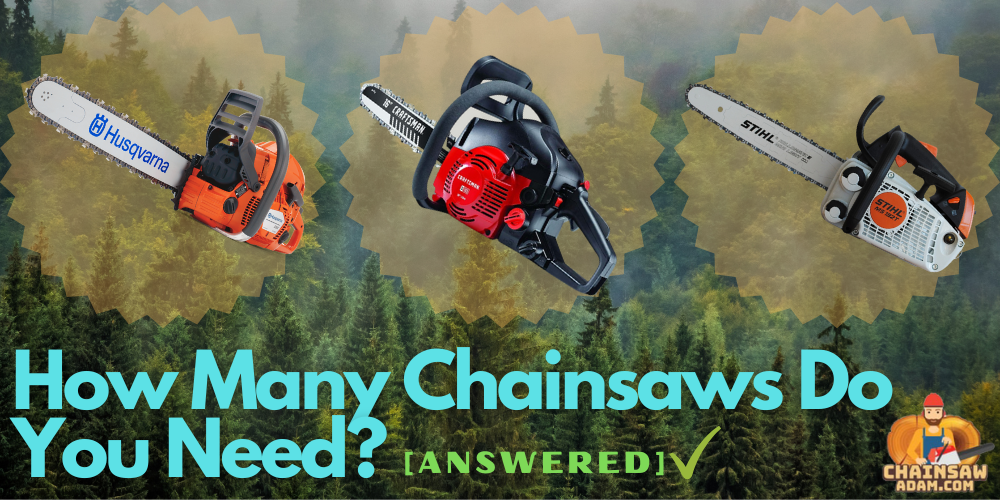 How many chainsaws do you need?

That’s exactly what I’ll be going over in this post, so let’s get straight into it!

Table of Contents show
Why should you have multiple chainsaws?
What factors influence the size of the saw?
So, will a longer bar help?
What’s a good all round chainsaw?
Conclusion

Why should you have multiple chainsaws?

Most of us get by with a single saw but circumstances can suggest that a second saw would make things so much easier. It all depends on the type of cutting that is required. A bigger saw will take care of the thicker cuts, but it will be heavy to lug around when doing trimming and pruning.

Normally we would talk about a larger saw with a longer bar to get through the felling requirements, but we can also talk about the value of having a gas and an electric chainsaw.

So ideally the most efficient combination would be a gas-powered saw that could handle the largest cuts you’re going to make and back this up with an electric chainsaw for pruning and clearing the smaller branches. See it as the massacre and the manicure!

What factors influence the size of the saw?

Basically, your decision is guided by the trees you are going to manage.

What you are going to be looking for is the lightest chainsaw that is going to efficiently get through the wood at a reasonable speed. It’s a compromise, weight versus time with the added permutation of how long you will be cutting for.

If you are cutting primarily for firewood, then your average log diameter is going to be around 6 inches or less, so you need a chainsaw that has the correct combination of weight and power to handle that size of timber. This would typically be a saw between 30 to 40 cc but here comes the problem.

If you want to use the same saw to cut significantly bigger sections and many of them, you are going to find that the saw is going to struggle, and the cutting is going to be a slow process.

So, will a longer bar help?

The situation boils down to the number of teeth that are cutting at a particular time and the power of the saw to be able to move the teeth through the timber.

If you find that the diameter of the tree that you’re cutting is bigger than the length of the bar on the saw, chances are a bigger saw is needed or at best a longer bar.

Now on many chainsaws, there is the facility to fit a bigger or smaller bar according to what is required however bear in mind the power limitations of the engine.

A useful rule of thumb is to divide the cubic capacity of the engine by the number of teeth on the chain supplied by the manufacturer and don’t stray too much further than ten percent on the upside of this figure.

There is also the safety factor to consider and, using the other thumb, the safety rule is to have the bar at least two inches longer than the diameter of the log to avoid kickbacks.

Also, remember that there is no difference in the performance of the chainsaw with a longer or shorter bar in circumstances where the diameter of the log is less than the length of the bar. The same number of teeth are doing the cutting.

There is however one other advantage of a longer bar and it’s not related to power but rather the amount of comfort in not having to bend down so far when trimming branches from felled trunks. It’s only a couple of inches but after a few hours of cutting those inches will be greatly appreciated.

All the chainsaw manufacturers have charts to indicate the appropriate model saw for the most common size of timber you are going to be cutting so it’s useful to check with them prior to selecting a saw.

What’s a good all round chainsaw?

With an above satisfaction rating on Amazon, the Husqvarna 450 II e-series is a well-liked model that is powerful enough to deal with substantial logs and trunks.

The saw has a powerful 50,2cc engine and a great array of features like Smart Start, inertia activated chain brake, and an industry leading low vibration feature, called LowVib.

And yes, you can change the 18 bar for the longer 20 to save you bending your back.

The number of chainsaws you need all depends on the tasks you’re doing. If you prune and fell large trees, you’ll need two chainsaws. Even if you install a longer bar on the small chainsaw, it still won’t be suitable for large felling tasks due to the small engine.