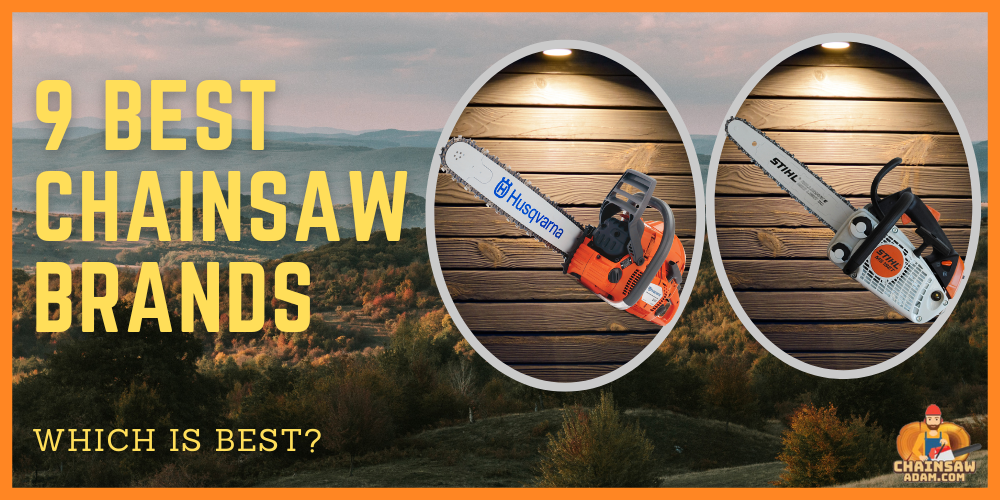 Are you looking for the best chainsaw brands?

Well, you’ve come to the right place because that’s exactly what I’ll be going over in this post.

Check out the Husqvarna chainsaws

Founded in 1689, the Husqvarna Group is a manufacturing group based in Sweden. They offer a wide range of power products from chainsaws, trimmers, mowers, etc. They entered the chainsaw industry in 1959 as the forestry industry became increasingly important.

Husqvarna produced their first chainsaw in 1959 and have since made their contributions in innovation for chainsaws since then. Today they offer gas and battery-powered saws as well as an extensive knowledge base to help users understand or expand their knowledge in the industry.

Great performance, good prices, and environmentally friendly are some of the guarantees Husqvarna aims to offer. This makes them one of the more widely recognized and well-reputed chainsaw brands out there. Customers rate Husqvarna chainsaws positively.

Users ranging from professionals to casual users have reported this chainsaw brand as one of the best they’ve ever owned. Easy startups, ease of use, low vibration, and a worthy upgrade are common themes when it comes to user experience with some of the chainsaws Husqvarna offer.

Check out the Stihl chainsaws

Founded in 1926, Stihl is a chainsaw manufacturer based in Germany. The founder of Stihl created the first electric chainsaw that moved into the production line. Apart from that, Stihl would also be the first brand to introduce an anti-vibration handle on the chainsaw.

When it comes to chainsaws, they offer gas, cord-electric, and battery-powered. From home-owner use to professional-grade, Stihl has a wide line of chainsaws fit to complete any task you want to do.

They even offer specialized chainsaws for arborists and carving. Quality products sold by quality people are what Stihl aims to offer. Stihl claims to be one of the top-selling brands of gasoline-powered equipment.

Do electric chainsaws overheat?
How many chainsaws do you need?
What Size Chainsaw Do I Need?

Check out the Echo chainsaws

The Kioritz Corporation’s original focus was on producing pesticides for crops while still producing some forms of blowers and power tools. But then they produced their first-ever chainsaw branding “The Echo” in the 1960s.

It wasn’t until 1978 when the Kioritz Corporation decided to rename the company to Echo Incorporated. They had also switched their focus from pesticides to chainsaws.

Today, Echo Incorporated is a chainsaw manufacturer and one of the largest subsidiaries of the Yamabiko Corporation. They are a company based in Japan.

Now available in over 90 countries, they sell a variety of power tools ranging from hedge trimmers, bush cutters, and chainsaws. They manufacture their equipment using parts from both domestic and foreign sources.

Echo operates specifically with the professional users of chainsaws in mind. They offer only battery-powered and gasoline operated chainsaws. Echo is well-reputed within the experienced community of chainsaw users.

Good and honest equipment, worth the money, and more than enough power are some of the few things reviewers had to say when using an Echo chainsaw.

Check out the Craftsman chainsaws

Craftsman have traveled from different manufacturing companies over the years. They were originally a trademark that was associated with Sears dating back to 1927.

This gave them a well-reputed name when it came to affordable and quality tools inside the US. Sears never manufactured the Craftsman tools themselves. Instead, several manufacturers had produced Craftsman tools according to Sears’ specifications.

It wasn’t until 2017 when the Craftsman brand was acquired by Black & Decker.

Now being associated with Husqvarna, another well-reputed brand in the chainsaw industry, Craftsman chainsaws are manufactured by Husqvarna using various parts.

They predominantly use Husqvarna technology but also use other sources. However, this doesn’t mean they are of the same quality or serve the same purpose. They offer battery and gas-powered chainsaws that often fall in the mid to low range category.

The intended audience for Craftsman chainsaws is homeowners and DIY enthusiasts. Craftsman customers say these chainsaws are easy to use, good power, and perfect for homeowners.

Check out the Remington chainsaws

Arthur W. Mall is the founder of Remington company (Originally known as the Mall Tool Co.). They had focused only on producing electric/gasoline-powered drills and saws. As the company’s reputation grew, the company began to spread and become more popular.

Remington released their first chainsaw in 1954. By 1956, Remington Arms corp. had acquired Mall Tool Co. and renamed it to Remington Power Tool Division. At this point, they were keen on focusing on the production of chainsaws.

After some financial difficulties in 1969, DESA Industries acquired the tool division of Remington. In terms of innovation in the chainsaw industry, Remington had introduced their electric chainsaw in the 1990s.

Today they offer a wide range of products from pole saws, gas trimmers, and chainsaws. Mainly focusing on gas-powered chainsaws, they also offer corded electric chainsaws. Remington aims to target those beginning to use chainsaws.

Great value for the money, good for homeowner use, and couldn’t ask for more are some of the comments left by reviewers across various reviews of Remington chainsaws.

Check out the Greenworks chainsaws

A parent company by the name of Globe Tools Group had founded Greenworks Tools in 2007. While other companies aimed to target a wide range of chainsaw users, Greenworks on the other hand, became one of the leaders of lithium-ion powered tools in the industry.

Greenworks offers a variety of tools that include hedgers, lawnmowers, and chainsaws. The main focus of Greenworks’s product design is “fewer emissions and noise”.

As far as cordless battery-powered chainsaws go, Greenworks is one of the more dependable brands on the market. Greenworks innovated their part of the industry by eliminating the common downsides of using electric chainsaws.

Their chainsaws are more than ready to handle tasks that wouldn’t be considered “light work.” Greenworks’ chainsaw lineup is mostly composed of 40V and 60V chainsaws, but they also offer 80V chainsaws.

Check out the Dewalt chainsaws

Raymond DeWalt was the man who founded The DeWalt Products Company in 1924. The first product that DeWalt offered was a radial arm saw that Reymond Dewalt invented himself. By 1947, DeWalt had reorganized and had become a subsidiary to the newly formed DeWalt Inc.

In 1960, DeWalt Inc. had been sold to a conglomerate known as Black & Decker. By 1992, they revolutionized their industry by introducing portable power tools. Over the years, DeWalt has manufactured over 200 electric power tools. They had made the ion-lithium battery a universal component of their tools.

Today DeWalt is known as the DeWalt Industrial Tool Company with its headquarters located in Hampstead, MD. DeWalt offers tools such as impact drivers, drills, grinders, and chainsaws. In terms of chainsaws, like Greenworks, they offer their line of battery-operated chainsaws.

DeWalt offers only 20V and 60V chainsaws. Their target audience is the homeowners who want something powerful but not fully intended for professional use.

The performance of the DeWalt chainsaw battery line often surprises the reviewers. It is as good as it gets.  Some even likened it to a gas-powered chainsaw.

Check out the Black+Decker chainsaws

Just like DeWalt, users see them as one of the early innovators of handheld power tools. Fast forward some years, Black & Decker acquired DeWalt in 1960.

They had then changed their name to the Black & Decker Corp. in 1985. In 2010, they had merged with Stanley Works to become Stanley Black & Decker; Then rebranding as Black + Decker by 2014.

Today, they also hold the Craftsman brand. Black + Decker offers a variety of products ranging from power tools to home appliances such as coffee makers, toasters, and mini-fridges. As far as chainsaws go, their target audience is for casual usage rather than professional.

They offer battery-powered chainsaws. The Black + Decker chainsaws’ good performance impressed their customers.  However, some warn that their line of chainsaws may not be the best fit for tougher jobs that require more power.

Check out the Makita chainsaws

Mosaburo Makita, a Japanese man, established the Makita Corporation in 1915. They began by manufacturing electric motors and as a repair company.

Moving along into 1958, Makita had then begun to delve into the power tool industry. Seeing success in their line of power tools at the time, Makita then made the jump into developing their first cordless power tool in 1978.

Today, they have factories that operate all over the world. These countries include Brazil, China, Mexico, Germany, the United Kingdom, and the United States. Makita offers a wide range of power tools from drills to chainsaws.

One thing to note is that Makita had acquired Dolmar in 1991. Dolmar, as some of you might realize, was one of the top-rated gas-powered chainsaw manufacturers.

Since they own one of the leaders of gas-powered chainsaws, you can pretty much guess that Makita offers chainsaws geared towards larger tasks.

They offer two types of chainsaws, corded/cordless electric and gasoline. The customers usually call this line of chainsaws high quality and worth the money by reviewers. Some have even held comparisons to other top brands such as Husqvarna.

So those were the best chainsaw brands out there.