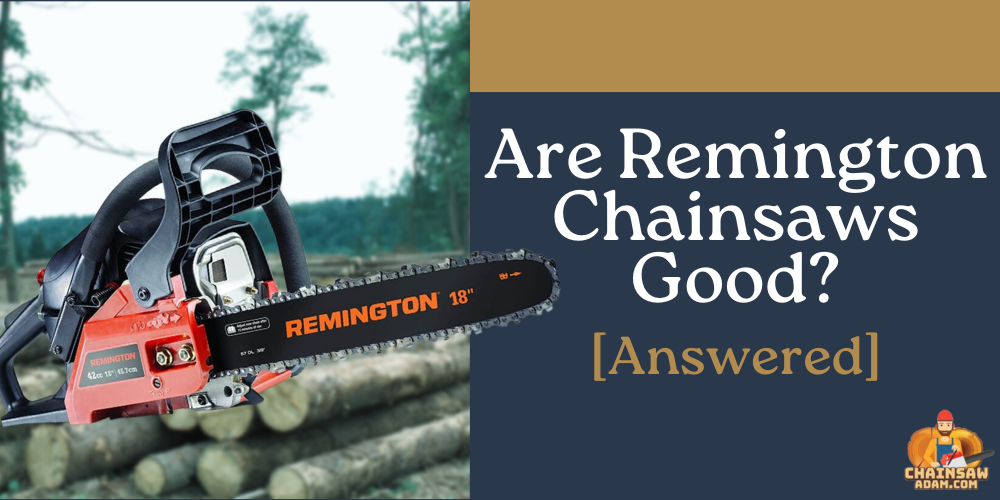 You’ve come to the right place because that’s exactly what I’ll be going over in this post. I’ll be covering if the Remington brand is any good, what customers are saying about them, the quality of their chainsaws, and more.

What do customers say about Remington?

The customer reviews for Remington chainsaws are overwhelmingly positive. Customers have mentioned how easy it is to start even though the model they’re using is gas operated. It took less pulls than the manual had suggested to get it going.

A reviewer mentioned how he was prepping for winter and had a lot of trees to cut through and was eager to get started as winter was fast approaching. He mentioned how the Remington chainsaw cut through wood like a hot knife through butter.

Remington makes the exact kinds of chainsaws as it says on the box it’s made for cutting wood with absolute ease.

A man in his 70s mentioned how he used his Remington chainsaw to cut through wood all throughout the summer and didn’t have any problems. The only issue he had was it leaked some bar oil when he would put it away. This happens to most chainsaws if you don’t drain the oil.

Remington makes amazing chainsaws for homeowners. Their saw are great for both heavy and occasional use. It doesn’t drink a lot of gas and Remington saws are very affordable, saving you lots of money instantly.

Both beginners and experienced users are switching to Remington chainsaws because of the affordability, ease of use, and power of the saw.

What types of chainsaws does Remington produce?

Remington produces both gas and electric chainsaws, the majority of them are gas powered. Unfortunately, some of Remington’s electric saws haven’t been well received by users. Users have mentioned how the chain would lose its tension quickly, lots of bar oil would be leaking, and it clogged often.

So I would recommend staying away from their electric saw and have a look at their gas models instead. Since that’s what Remington is known for and where it really shines. Remington has made great leaps in creating powerful gas saws at an affordable price.

Their chainsaws range from 14 to 18 inches in bar length. Making them great for pruning, limbing, bucking, splitting wood, and felling trees. Whatever your needs are, this company has you covered.

Is Remington chainsaw quality any good?

Customers have updated their reviews and mentioned that they’ve had their Remington chainsaw for multiple years and it’s still fully operational. Making it a great long term investment and something you can actually rely on.

Their bars and chains are made from high quality metal, making it highly bend resistant and the chain will last a long time before it becomes dull. It’s not going to break on you anytime soon, especially the times when you really need it.

The casing of their chainsaws are typically made from a matt style plastic, but what did you expect from a lower price point chainsaw? It’s worth keeping in mind that it’s not a cheap type of plastic that starts to creak. It’s something that feels good in the hand, a premium feel.

Are Remington chainsaws made by Husqvarna?

No, MTD Products have made the Remington brand and Husqvarna is one of MTD’s competitors.

Husqvarna chainsaws are made in Sweden since it’s a Swedish brand and they’re also made in the USA.

The best Remington chainsaw is the Remington 41AY4218983 RM4218CS. It has an 18 inch bar, a 42cc gas powered engine which allows it to cut through thick wood, an automatic chain oiler, and weighs 20.2lbs/9.1kg. Making it great for bucking, splitting wood, limbing, and felling trees.

Even though it’s gas operated, it’s easy to start, just pull on the cord and you’re good to go. There’s an adjustable automatic chain oiler, allowing you to decide how much the chain and bar are being lubricated.

There’s an anti-vibration system which absorbs the vibration, preventing your hands from going numb, and making it easier to operate for a long period of time.