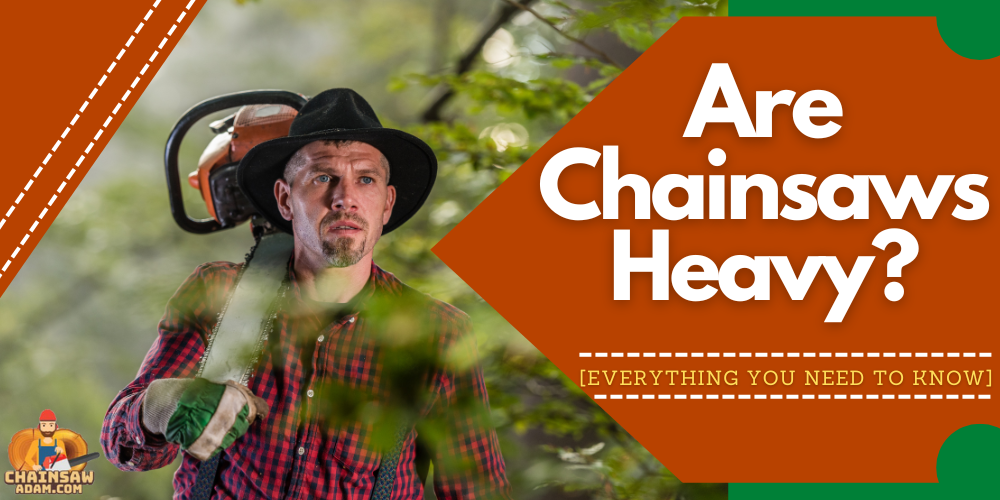 Well, you’ve come to the right place because that’s exactly what I’ll be going over in this post.

So let’s get straight into this!

How is a chainsaw weighed?

Ask anyone who uses a chainsaw if they think a chainsaw is heavy and you may get the strange answer that ‘Yes, and it gets a whole lot heavier as the day goes on.

The pictures of woodmen with bulging biceps are not accidental. Chainsaws are heavy work. And the simple question of weight is not so simply answered because there are different ways to establish the weight of a chainsaw.

We are getting lighter as we go here. The powerhead weight equals the dry weight minus the bar and chain. The reason why the dry weight is important is that on many chainsaws there does exist the opportunity of fitting a different bar.

Normally this would be done to lengthen the bar, so it does influence the overall weight of the unit.

Rather predictably this is the weight most often quoted by the manufacturers because it is the lightest measure of the weight of the machine.

Also sometimes referred to as the Total weight this is the weight of the saw when the tanks are full, and the machine is ready for a day of work.

It is the weight you will pick up at the start of the day and you may think that it is the heaviest the chainsaw can get to but believe me, by the end of the day the saw will feel so much heavier despite the tanks being a lot less full.

There is another element to the weight factor and that is the vibration of the machine.

It’s hard enough lugging a chainsaw around for the day but the combination of having to deal with the vibration of the saw added to bracing against the tug of the chain chomping through the timber can be exhausting.

That is why it is so critical to select the chainsaw with the least weight that is sufficiently powerful to handle the range of wood sizes normally encountered.

It may not be too serious if you are only planning half an hour or so of cutting but when the project involves prolonged cutting every ounce is going tug mercilessly at your bulging biceps.

Electric chainsaws come in two versions, cordless and corded. Corded chainsaws are the lightest but suffer from the limitation of requiring a nearby power source. Consequently, they are only suitable for smaller areas and are aimed for lighter workloads and smaller cuts.

Cordless chainsaws have become much more popular in recent years and they are strong contenders in the smaller chainsaw sector being more than competitive with the smaller gas powered machines.

Another factor to consider is that many of the battery powered chainsaws can make use of a battery back-pack which reduces the weight of the chainsaw considerably.

Generally, gas and battery powered chainsaws are of almost equal weight. Using the Stihl MS211 gas powered machine as an example, the unit weighs just over ten pounds while the equivalent battery powered MSA220C tips the scales at just over 11 pounds.

However, as we climb the power scale the weight advantage starts to tip in favor of the battery powered machines, but this may also be the result of battery back-packs coming into play.

The Husqvarna 3120 XP is a monster of a machine. It can fit a forty two inch bar and the eight horsepower engine can deliver almost eight newton metres of torque.

Strong muscles are required to pick up this machine which weighs twenty three pounds. Fortunately, it also has a decompression feature for starting the engine.

An even heavier machine is the Stihl MS881 which is a little over three pounds heavier than the Husqvarna and delivers an extra newton meter of torque. It can fit a forty eight inch bar.

The Stihl MSA220 CB is the most powerful battery powered chain saw from this manufacturer and weighs just over three and a half kilograms (eight pounds).

It has a sixteen inch bar. The DeWalt sixteen inch equivalent (DCCS670X1) comes in at just over twelve pounds. It is powered by a sixty volt lithium battery.

Yes, chainsaws are heavy but you can also find lighter chainsaws that will typically be electrically powered. Chainsaws can feel heavier the longer you’re holding them since your muscle will become fatigued as time goes on.